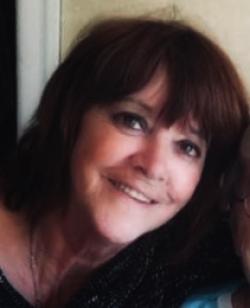 Feltmate (Crispo), M. Bernadette "Bee", age 60, Antigonish. A bright light and a beacon to those who needed kindness was called home on April 30, 2019.

Born in Antigonish on October 4, 1958 Mary Bernadette (Bee) Feltmate was the youngest daughter of the late Marie and James Crispo of Monastery.

Bernadette married Roy Feltmate as a young woman and soon after welcomed two beautiful daughters, first Amy then Holly to her life.  Bernadette and Roy loved their girls and their little home in Goshen, where friends were welcomed and considered family.  Roy’s work moved them around NS and in 1992 Roy was lost in the Westray Mine, leaving his young family heartbroken.

Bernadette later met George Bowie who was able to help mend her heart and together they delighted in the birth of their daughter Nikita.  Bee beamed with pride as Nikki grew from a spirited little girl to a strong young lady.

Bee had an open-door policy, if you needed a cup of tea or coffee and good long comforting chat, her kitchen table always had room for another chair.  There was no limit to the antics she would perform to put a smile on your face when she knew your heart was in need.  Her ability to bring joy when faced with sorrow provided great comfort to so many.   Her words could be soft and encouraging or sharp and snappy, depending on what was required.

Visitation will be in C.L. Curry Funeral Home, 135 College Street, Antigonish on Friday from 2 to 4 and 7 to 9 pm.  Funeral Mass will be in St. Ninian Cathedral on Saturday at 11:00 am with Reverend Donald MacGillivray presiding.  Burial in St. Peter’s Cemetery, Tracadie at a later date.

Donations in memory may be made to Cathy’s Place at St. Martha’s Regional Hospital.  Online condolences:  www.clcurry.com.