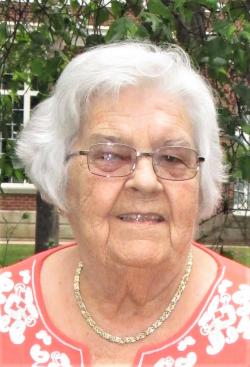 We regret to announce the passing of Mary Frances "Murph" Chisholm of Antigonish, Nova Scotia, in St. Martha’s Regional Hospital, Antigonish, on August 25, 2019.

Born in Sydney, Nova Scotia in 1928, she was a daughter of the late Dennis and Jane (Hollohan) Murphy.  She graduated from Holy Angels High School and moved to Antigonish in 1947 to study and train as a nurse at St. Martha’s Hospital. She graduated in 1950, meeting many of her life-long friends during those years. She became known as "Murph" at the hospital to distinguish her from another Mary Murphy. The nickname became even more helpful when she married Fraser Chisholm in 1960, as there were a few other Mary Chisholms in Antigonish at the time.

Murph and Fraser were married for 41 years, spending a significant period of their days together behind the steering wheel of a car. There are stories of trips to Boston, Hartford, and every corner of the province to deliver vehicles to Fraser’s customers or to visit relatives. Remarkably, she agreed to a honeymoon trip by car to Monterrey, Mexico in 1960, and in their later years, a more customary annual drive to Florida.

Once she received her RN designation, Murph was a supervising nurse at St Martha’s TB Sanitorium for 5 years, with 50 patients under her care. She went on to join Dr. Murphy’s practice, retiring early to stay at home with her 3 children and to be available for that next road trip.

While raising her family, she joined the St. Martha’s Hospital Auxiliary, holding positions of Secretary and Treasurer for several years, and joined her friends in the preparation of many fundraising activities for the hospital. She knitted and crocheted as well throughout most of her life, contributing to many of the Auxiliary sales until arthritis curtailed this activity. She took evening classes in ceramics and upholstery with close friends, Louise, Margie, Evelyn, and Shelagh, and learned how to use a computer in her 70s. She was still doing her banking online this year. Our family home benefitted greatly from her renovating skills and ability to work around its eccentricities, and she took great pleasure in scanning roadside sales and antique stores for hidden gems. Fraser learned early on to incorporate such ventures into every travel itinerary.

We’ll remember our mother for her love, dedication, generosity, intelligence, sharp wit, determination, strength, courage, and her fierce independence. Despite a debilitating back issue for almost 20 years, she continued to make trips to Saint John, Ireland, and Florida to visit.

Even as her activities became more limited, she took great pride in still being able to make the decisions needed to maintain her home and garden. Murph was always a great reader, primarily of murder mysteries, exchanging books and recommendations on a regular basis with close friends. Her bird feeder in the kitchen was also a pleasant daily distraction for both her and her visitors.

Visitation will be held Wednesday in C.L. Curry Funeral Home, 135 College Street, Antigonish, from 2 to 4 and 7 to 9pm.  Funeral Mass will be held Thursday at 11:00am in St. Ninian Cathedral, Reverend Donald MacGillivray presiding.  Burial in the parish cemetery.

In Memoriam, donations can be made to VON Antigonish or St. Martha’s Regional Hospital Auxiliary.  Online condolences:  www.clcurry.com