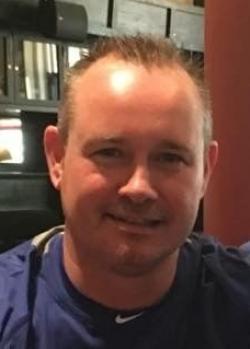 Born on May 21, 1975, the oldest son of Alice (Connors) Mattie and the late Wayne Mattie, passed away at Joseph Brant Hospital in Burlington, Ontario, on September 16, 2019 after a courageous battle with pancreatic cancer.  Jody will be forever missed by his loving wife of 12 years, Megan (Pilgrim) and treasured daughter, Bryn Jana Lee.

Jody graduated from St. Francis Xavier University.  He worked at Altimax Courier, FedEx and most recently at UPS Freight as the Area Sales Manager.  He recently received an award and grateful appreciation for 10 years of dedicated services to UPS.

Sports were ever present in Jody’s life.  Beginning at an early age, he played hockey, softball, and golf and disliked losing at any.  A long time season ticket holder and avid Toronto Raptors fan; Jody took great pride in this year’s championship title.

When Jody walked into a room within moments he would be captivating people with his larger than life personality, contagious energy and clever wit. Before long he would have a plan for everyone in the room that no one dared to veer from.  A testament of lives he touched was evident during his short illness by the overwhelming support he received from his network of friends and colleagues who travelled to visit, sent well wishes and told stories about his life.

He was idolized by his three brothers, Jamie (Nicole), Johnny, and Jerry (Rieneke); nephew Jack and niece Andi Lee.  He is also survived by many cousins, aunts, uncles, and wonderful friends.

Jody is predeceased by his sister Jana Lee, grandparents Margaret and Francis Mattie and Mary and Reg Connors.

Donations can be made in trust to Jody’s daughter, Bryn.   Email transfers will be accepted at brynjanaleetrust@gmail.com, or by contacting the family.

Funeral arrangements are under the direction of Smith's Funeral Home, Burlington, Ontario.

Jody's obituary is posted locally on our website on behalf of Smith's Funeral Home of Burlington, Ontario.