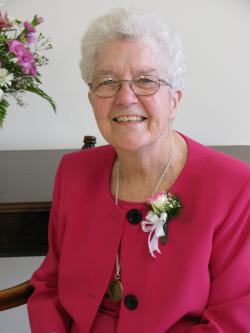 MacDougall, Olga, formerly Sister Margaret Hugh (83), a Sister of St. Martha of Antigonish, died at St. Martha’s Regional Hospital on the Saturday January 4, 2020 in the 60th year of her Religious Life.

Born in Whitney Pier, Cape Breton, Nova Scotia, Sister Olga was the youngest of eleven children of the late Hugh A. and Margaret (MacNeil) MacDougall.

After her profession of vows Sister Olga began social work in Antigonish. This was interrupted while she studied at St. FX University to obtain a B.A. She then returned to social work, this time in Cape Breton, in Bras D’Or and Sydney. Sister Olga received a Diploma in Pastoral Ministry from St. John’s Seminary, Brighton, Massachusetts following which she served as Director of Bethany Retreat Center, Antigonish, and served on the staff at Galilee Retreat Centre, Arnprior, Ontario. She pioneered the opening of Wellspring Centre at St. FX University as Director and was also on the Bethany Community Leadership Team. Sister Olga used her secretarial and office skills in ministry at St. Martha’s Catholic Center in Boston, MA and Genesis House, Chicago IL. Within the congregation she served two terms as General Secretary and was Director of Vocation Education and Pre-Novitiate.

Sister Olga’s sense of adventure took her to Australia on her year of renewal and to a hermitage experience at the Spiritual Life Center, in New Jersey, long before hermitages were a popular form of retreat. A deeply caring person, Sister Olga had a heart for those who experienced loss and used the knowledge she gained from social work, studies in spirituality and tools such as the Enneagram to become a well-loved spiritual companion to many.

The remains will be resting at Martha Place, Parkland Antigonish, beginning Tuesday January 7, 2020 at 2:15 pm where a celebration of vigil will be held on the same day at 7:00 pm. Liturgy of Christian burial will take place on Wednesday January 8, 2020 at 1:30pm in St. Martha Chapel, Parkland, Antigonish.

Arrangements are under the direction of C.L. Curry Funeral Home, Antigonish. www.clcurry.com