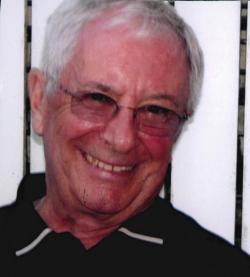 Sears, John Tulloch, Johnny to many, 88, of Hawthorne Street, Antigonish died on February 5, 2020, in the company of many he loved and loved him back double.

John was born in Antigonish on October 19th, 1931 to the late Cyril Francis Sears and Irene Genevieve MacDonald. Dad married Mom, Mary Ann Hemeon of Liverpool, NS in 1955, and together they raised five children, starting in Antigonish, moving on to Boston to study, and then back to Antigonish to his alma mater of StFX.

Dr. John T. Sears graduated from St. Francis Xavier University with a Bachelor of Commerce degree in 1952.  After completing his MBA from the University of Detroit in 1954, John returned to his alma mater as a member of faculty where he remained until his retirement in 1996.  He earned a Doctorate of Business Administration from Harvard University in 1966.

During his career at StFX, John was a respected and beloved teacher, fondly remembered by his students for his engaging style, depth of knowledge, and sharp wit. He taught courses in a variety of disciplines but most notably in the fields of financial management, strategy, small business management, and corporate social responsibility.  As a result of his reputation in the classroom, Dr. Sears was an invited visiting professor at both the University of Western Ontario (1968-69, 1978-79, 1987) and the University of British Columbia (1988, 1996) during his time at StFX.

In addition to serving as a member of the teaching faculty, John was called upon to serve the university in a variety of administrative capacities during his career.  He was Dean of the Faculty of Arts from 1970 to 1972.  From 1972 to 1980 he accepted the dual role of Dean of Arts and Dean of Science. He then served as Academic Vice-President on two occasions, from 1984-87 and from 1991-95.  John is credited with many significant accomplishments during his time in administration. The vibrant theatre tradition at StFX is said to owe a great deal to his efforts and support.  In addition, Dr. Sears was instrumental in the development of a program to recognize teaching excellence at the university.

While a well-known and respected member of the university community for over forty years, he played a similarly significant role in his hometown of Antigonish. Having been born and raised in Antigonish, Dad was quick to give back in a variety of ways.  He served as chair of the board of St. Martha’s Regional Hospital, vice-chair of the board for the Casket Printing and Publishing Company, treasurer and board member of the Eastern Counties Mental Health Centre, director of Atlantic Broadcasters Ltd., chair of the board of the Antigonish Early Childhood Intervention Program, among many other roles.

John was sought after regionally and nationally as well to share his leadership abilities and management acumen to numerous review committees, boards of directors, and advisory councils.  Most notably, serving as a member of the board of the Institute of Canadian Bankers, a member of the regional advisory council for the Atlantic Provinces (Federal Business Development Bank), a member of the board for Canadian National Railways, CN Hotels, CIDA, Halifax Industries Limited, Industrial Estates Limited of Nova Scotia , and the Advanced Management Centre at Dalhousie University, amongst many more.

In recognition of his many years of dedication to his alma mater, as well as his service to community, Dr. Sears was awarded a Doctor of Laws Honoris Causa by StFX in May 2002.

In 2016, Dr. John T. Sears received further recognition when The Dr. John T. Sears Chair in Corporate Social Responsibility was inaugurated during ceremony in the Gerald Schwartz School of Business at StFX. This was a further honour for a distinguished alumnus, faculty member and senior administrator at St. Francis Xavier University.

He was also active in his church, having served on St. Ninian Parish Council for a number of years.

Dad was a big Boston Red Sox fan and waited until the week after his 73rd birthday for them to win the World Series.  He cheered equally for the Toronto Maple Leafs.

He was predeceased by his wife Ann, their daughter, Siobhan; and his siblings Estella, Mary, and Gerald.

Visitation will be held Friday from 2 to 4 and 7 to 9pm in C.L. Curry Funeral Home, 135 College Street, Antigonish.  Funeral Mass will be held Saturday at 11:00am in St. Ninian Cathedral, Reverend Bill Crispo presiding.  Burial in the parish cemetery at a late date.

In Memoriam, donations made be made to The Antigonish Food Bank, The Alzheimer’s Society, or a charity of your choice.   Online condolences:  www.clcurry.com