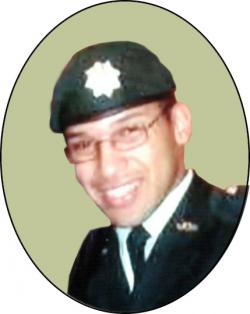 Desmond, Corporal Lionel Ambrose, age 33, of Monastery, succumbed to the tortures of PTSD on January 3, 2017.

Lionel was born in Antigonish, son of Kenneth Jones, Havre Boucher and the late Brenda Desmond.

Lionel served the Armed Forces from September, 2004 to July 2015 with the 2nd Battalion Royal Canadian Regiment at Gagetown, NB. He served his country proudly with two tours in Afghanistan. Lionel was known for his friendly demeanour and contagious smile. His can do attitude was evident while serving his unit and community. He will be remembered as an amazing son, brother, father, husband, nephew, cousin and grandson.

Besides his father, he is survived by sisters, Diane and Katlin, Halifax; Chantel (John) and Cassandra, Antigonish; grandparents Wilfred and Ardella Desmond, Lincolnville and grandmother Elsie Morris of Lincolnville.

He was predeceased by his mother, Brenda; wife, Shanna and daughter Aaliyah.

Visitation will be held on Tuesday from 2 to 4 and 7 to 9 pm in Monsignor Donnelly Hall, Tracadie. Funeral Mass will be held in St. Peter’s Church, Tracadie on Wednesday at 11:00 am with Father John Barry presiding. Burial in St. Monica’s Cemetery, Lincolnville at a later date.

In Memoriam donations may be made to St. Monica’s Church, Lincolnville.

There will be a feast and auction at the Paqtnkek gymnasium, Afton Reservation following the Funeral Mass Wednesday.  All are welcome.