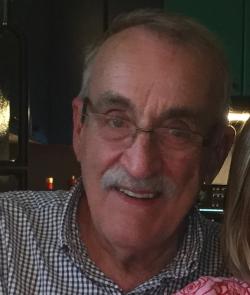 Doucette, Ronald Lionel "Buddy", Age 74, of Antigonish Harbour died peacefully at home on February 1, 2018 in the house he designed and built on the land he loved and cultivated.

Buddy was born in Van Buren, Maine, on August 24th 1943 to the late Alexander and Rosella (Plourde) Doucette.

In 1962, Buddy moved to Nova Scotia to attend St. Francis Xavier University where he met the love of his life Addy Wintermans when they performed as Romeo and Juliet and then in the Dominion Drama Festival's award-winning Wakefield Cycle.

Addy and Buddy were married in Quebec City in 1970 and lived in Montreal where Buddy taught high school English and French. In 1978, they moved their family permanently to Antigonish Harbour. Once in Antigonish, Buddy embarked on a professional acting and directing career, performing in the Maritimes and across Canada. In recent years, he frequently directed plays at the Bauer Theatre and took pride in mentoring young writers and actors. Buddy’s last performance was playing Kris Kringle in the Theatre Antigonish production of Miracle on 34th St.

Buddy was an active member of his community and a volunteer, most recently teaching English to Syrian Refugees. He was tremendously proud of his two daughters, and took great delight in his grandchildren.

He is survived by his wife, Addy; his daughters, Sophie Doucette, Ottawa; Annique Doucette (Devin) and grandchildren, Auden and Noel Carrier, Vancouver; brother, Francis, Nevada; and many cousins, nieces and nephews across Canada and the United States.

In addition to his parents he was predeceased by grandson, Jack Henry Doucette; his sisters, Sr. Bernardine Doucette, Sr. Lorraine Doucette, and Jacqueline Nadeau; and brothers, Robert and Roger.

Visitation will be held on Sunday from 2-4pm and 7-9pm in C. L. Curry Funeral Home, 135 College St. Antigonish. Funeral Mass will be on Monday at 11:00am in St. Ninian Cathedral, Reverend Donald MacGillivray presiding.