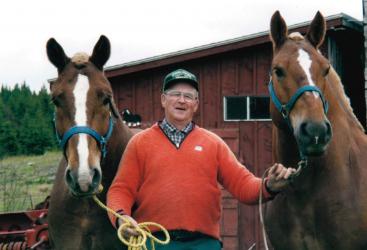 You can view Joe's funeral by watching the link below:

Born in Ogden, he was the eldest son of the late Hazel (Richardson) and Jack Kennedy.

Like so many of his generation, Dad was a hard worker and tough to the end. As a cancer survivor, he perservered with a trust in God and his family. Dad had a great love of the outdoors and started working very early in the lumber camps. A plumber by trade, Dad worked at Silver and Hannifen for some time, but the farm and woods were calling to him.  He and his loving wife Annabelle settled in Giant’s Lake (where she was born and grew up) and raised their large family on the small farm that will be forever referred to as "home".  Horses and Christmas Trees were the second loves of Dad’s life.  He was a long-standing member of the North Eastern Christmas Tree Association, St. Francis de Sales Church, the Oak and Owl Club, and the Eastern Nova Scotia Draft Horse Association.  He was also a former member of Local 244 of the Plumbers, Pipefitters and Welders.  Along with his outdoor activities, Dad enjoyed playing 45’s and a good fiddle tune.  In the past three years, Dad settled in with his friends and neighbors at SASHA, who made it feel like home…and we will be forever in their debt.

We would like to extend a sincere thank you to all who made Dad’s life a bit easier especially the last few years while he continued his journey without Mom by his side.  The VON Nurses and Homemakers of both Guysborough and Antigonish Counties.  Dr. Booth, his long time GP. The community of Giant’s Lake for all their unending support and love.  Special thanks to the EMS staff who assisted in Dad’s last moments with professionalism and compassion.

Visitation will be held Thursday from 2 to 4 and 7 to 9pm in C.L. Curry Funeral Home, 135 College Street, Antigonish.  Social distancing protocols must be followed, and masks are mandatory.  A private family funeral Mass will be held Friday at 11:00am in St. Andrew’s Church, St. Andrews, Reverend Andrew Gillies presiding.  A link to a recording of the funeral will be made available on the funeral home website.  Public burial in St. Francis de Sales Cemetery, Giant’s Lake, and social distancing protocols will apply.

"My flesh and my heart may fail, but God is the strength of my heart and my portion forever" Psalm 73:26