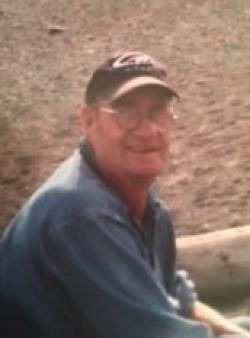 A thank you from the The Kirk Family

The Kirk family would like to thank everyone for their Love and kindness to our brother Downey.

Celtic Home for their excellent care they given Downey for over 20 years.

The RK McDonald Nursing Home for their love and kindness and excellent care, they were like his new family..

Rev Smith of St James United Church for a wonderful Service going to the gravesite on a very windy rainy day.

A special thanks to Patrick Curry for going above and beyond the call of duty.

And all the people that wrote such kind words about our brother in the guest book.

Born in Clydesdale, he was a son of the late John and Leah (Pushie) Kirk.

Downey was a farmer by trade, having at one time owned his own farm.  He was also a lover of music, and he had even written his own songs.

Besides his parents, he is predeceased by his brother, Huntley; sister, Jean; and sibling in stillbirth.

A funeral service will be held Thursday at 2:00pm at St. James United Church, Antigonish, with Reverend Peter Smith presiding.  Burial in St. James & St. Paul Cemetery.  A livestream of the funeral will be made available on the funeral home’s website.

In Memoriam, donations to the Schizophrenia Society of Nova Scotia appreciated.  Funeral arrangements are under the direction of C.L. Curry Funeral Home, Antigonish.  Online condolences:  www.clcurry.com

A Tribute from Downey’s sister, Ann

It is with great love and respect that I pay tribute to my brother, Downey.

As I began to search for the correct words to honour him, I am reminded that many people only know him by his illness.

Downey’s illness may have kept him from fully pursuing his talents, but his life did not lack meaning.  He was far more than a man who struggled with schizophrenia.  He was a kind and gentle man who cared about his family, his neighbours, and his community.  He was a hard worker on the family farm in Clydesdale, and he worked for others in the community.

Growing up on the family farm was not always easy, but we had many great times together.  My favourite memories are when Downey would sing his own songs on the back of the family pick-up truck on the way to the Casno Causeway or going to the beach on a Sunday afternoon.

Downey left several times to work in Ontario, but Antigonish was where he always wanted to be.

Downey was most proud when he owned his own farm in North Grant.  He enjoyed the simple pleasures of having friends and family over for a bonfire, playing his guitar, and singing Hank Williams songs.

Downey had a gift for music and would write his own.  His other passions included cooking and playing cards, especially crib.  For a while, he was enrolled in a cooking class in Cape Breton.

We all have struggles in our life, but Downey sure had his fair share!  I give Downey the utmost admiration for persevering through life’s challenges and not becoming bitter at the life he was given.

There have been many people who have shown their love and kindness to my brother, and for that I am grateful.

It is very hard to say goodbye, so I will say:

"Wherever there is a beautiful soul, there is a trail of beautiful memories.  And that is what I have of my brother."

REST IN PEACE Downey…until we see each other again.

A tribute from Downey’s brother, Ralph

Downey was my brother. He was a kind person. In life, he loved and was loved. He grew up in Clydesdale and never wanted to be far from Antigonish.

Downey taught me how to use a chain saw, peel pulpwood, and play cribbage. In doing so he taught me a lot about life, hard work, and thoughtfulness.

Downey approached life with a curiosity. He was interested in current affairs and enjoyed discussing any subject.

In recent years Downey was well cared for by the staff at the RK MacDonald Nursing home who he considered his family.

Downey is at peace now and his memory will live on in our hearts.