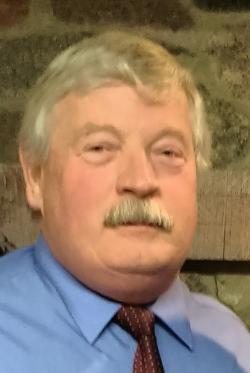 Boyle, John W. age 65, of Lower West River, Antigonish Co. died on December 19, in St Martha’s Regional Hospital Antigonish, with his family at his side. He fought a brief valiant fight with cancer.

Born in Beauly, Antigonish Co, and raised in Heatherton. He was the oldest child of Mary (Smith) West River, and the late John D. Boyle, formerly of Heatherton. His spirit will live on through his wife of 43 years Annabeth "Annie" (Robinson) and his children.

Predeceased by his father John (Jake) Boyle whom he adored, sister-in-law Anne Boyle.

John enlisted in the Armed Forces as a teen. He quickly realised he wanted to be an officer and took his commission in 1980. John graduated from the Royal Military College of Canada, Kingston Ont, as Communications Electronics Engineering for which he received the Governor Generals Award for Academic excellence, an achievement he was so proud of. He rose quickly through the ranks and served the Air Force for 23 years beginning in Debert NS, where he laid a wreath as the youngest Private (19) then St Jean, PQ, Kingston, Ont, Barrington, NS, Ottawa, Ont, Goose Bay Labrador, and finally as Commanding Officer back in Debert NS, where he laid a wreath as CO, Upon his retirement he worked until his passing for Nasittug Corp as Contract Program Manager.

He was a family man who loved his family with all the passion he possessed, but the Toronto Maple leafs were a close second. He was heard every year since 1967 to say "This Year", This year they are going to bring home the cup. He loved his cottage and his friends and if he could mix the two with a case of blue, he was a happy man. John had a brilliant analytical mind, he was a walking calculator, which he attributed to working with his dad on the milk truck as a teen. John was a kind, gentle, humble, honest man. He wasn’t aware of how great he was. He hated to have a fuss made over him and always put himself last. Everyone who knew John admired and respected him. He had not an enemy in the world. His family and friends will miss him immensely.

So a toast to you John may you rest in peace.

Cremation has taken place, and a memorial service will be held in the future once Covid restrictions are completely lifted. In Lieu of flowers donations may be made to Alzheimers Society of Nova Scotia, 112-2719 Gladstone St, Halifax NS B3K 4W6.