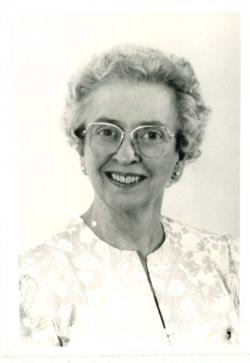 Mabel's funeral will be available for viewing after 2:00pm Thursday by following the link below:

Brunelle, Mabel Allan, age 92, of Antigonish passed away peacefully on December 24, 2020, at home with her daughters at her side.

Mabel was born October 28, 1928, the daughter of the late Alec and Jessie (MacLellan) MacLellan of Sydney.

Mabel was a graduate of Holy Angels Convent in Sydney and the Provincial Normal College in Truro.

While teaching primary school in Sydney, Mabel met the love of her life, Yves Brunelle of Montreal.  They remained on their honeymoon for 44 years.

Mabel is survived by her daughters, Claire and Anne, both of Antigonish; grandsons, Marcel (Amy), Lethbridge; and JeanMarc (Melissa), Fort McMurray; her great-grandchildren, Kelsey, Kody, Carter, and Ava; and her cousins, nieces, and nephews.

Claire and Anne feel very lucky to have been able to keep Mama at home and would like to thank the care team that made it possible:  Dr. Stephen Gallant and Laurie O’Connor, the St. Martha’s palliative care team, the nurses of VON Antigonish, and the staff of the Antigonish & Area Homemakers.

Due to current pandemic restrictions, there will be no visitation.  Funeral Mass will be held Thursday, December 31st at 11:00am at St. Ninian Cathedral with Reverend Donald MacGillivray presiding.  Social distancing protocols must be followed, and masks are mandatory.  The funeral will be recorded and will be made available for viewing that afternoon on the funeral home website.

In Memoriam, donations to St. Martha’s Regional Hospital Auxiliary, the Antigonish Community Food Bank, or a charity of your choice appreciated.