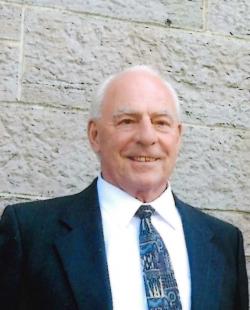 You can view Dennis's funeral Mass by following the link below:

Born in Antigonish, he was a son of the late Alonzo "Lon" and Agnes (Carter) Kelly of Mulgrave.

Dennis began his working life surveying, which took him to the northern parts of Quebec and throughout Cape Breton.  He transitioned to a position with Stora Enso (then New Page) and ultimately retiring from Port Hawkesbury Paper after a 30 year career in operations.  Upon retirement, Dennis built a cottage in Mulgrave on Butler's Lake spending many nights and weekends there with Theresa and their dogs, who were like children to them.

Dennis was an avid hunter and trapper in his early years.  He also enjoyed ice fishing, snowmobiling, and making sure the wood shed was always full.  He loved to dance and sing, with jive being his favourite.  There was never a dance they missed, nor a gathering at Johnny and Marie's, that he and Theresa wouldn't have a good time at.

Dennis was a very pleasant, and kind-hearted man who would always take time to stop and talk and ask how you were doing.  He had a pristinely landscaped yard in his early years in Havre Boucher.  The flower beds were always neat and tidy, and the hedges were always trimmed.

When Dennis's health began to slowly deteriorate in his early 70s, he came to enjoy the simpler things in life.  He would drive each morning to Port Hawkesbury to pick up a few groceries which were never really needed and then watch TV in the afternoon.  He enjoyed the daily routine of the drive to Hawkesbury and talking to his friends and former co-workers.

The family would like to thank Dr. Steve Gallant for his care over the years, as well as the staff at St. Martha's Hospital and Maple Ridge at the RK.

Cremation has taken place.  Funeral Mass will be held Thursday in St. Paul's Church, Havre Boucher, at 11:00am, with Reverend Allan MacPhie presiding.  In keeping with provincial restrictions, a maximum of 100 people are allowed in the church, social distancing protocols are in place, and masks are mandatory. A recording of the service will be available on the funeral home website later in the day.