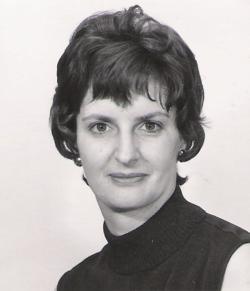 Lorna grew up in a large family and, following the early death of her father, her mother became the sole parent of seven. The Yeaton children developed strong bonds as they learned to support each other from an early age. Among those cherished bonds that have endured a lifetime, the ones with her only sister and with her twin brother were always special. Lorna has recently written a book in memory and celebration of the seven siblings. She is survived by her twin brother Lawrence, her brothers Sydney (Clara) and George (Joan) Yeaton and her sister Millicent Daniels (Bill). She is predeceased by her brothers Russell (Mabel) and Jack (Lily).

She was the wife of the late Bernard Cecil Jenkins. Mother to Jocelyn (Jim Hurd), Burton (Susan Larivière) and Deborah. Lorna also took much joy in her grandchildren, Nathaniel, Gavin, Garrett, Gabrielle and Gillian, as well as her many nephews and nieces. Lorna also leaves behind her dear friend and neighbour Lise DeVilliers (Paul MacLean). She was so grateful for the travel happy accident of their meeting.

Lorna graduated from the Nova Scotia Teacher’s College in Truro. It was there that she met Bernard. Over the years, they moved many times with their young family, finally ending up in Labrador City. In 2000, they returned to Nova Scotia where they built a home in Antigonish to be closer to family.

Daughter, sister, niece, cousin, friend, teacher, aunt, in-law, mother, businesswoman, grandmother, critic, and mentor: Lorna wore all these mantles with calm and grace. She was a masterful sewer and a reluctant but proficient knitter who was always willing to share her skills. Her quiet, steady presence was a boon to Deborah as she started her creative business.

Lorna wasn’t a huge fan of playing sports but a poetically excellent triple toe triple lutz or a hole-in-one would bring a tear to her eye and her hands to her mouth as she slowly crept to the edge of her seat. She was a wonderful cook, for whom cake was the pinnacle of culinary excellence, closely followed by the egg roll. Lorna threw herself into social events, as happy to entertain as to be a guest.

In retirement she and her sister travelled far and wide, often accompanied by other family members on trips where laughter and camaraderie were given free rein.

Lorna cared for her family with deep and abiding love. Her family, her friends and her beloved cat, Spike, all knew the value of this extraordinary gift.

A Celebration Of Her Life will be held at a later date. Memorial donations may be made to the St. Martha’s Hospital Palliative Care, the Canadian Cancer Society, or the Red Cross Antigonish.

You have hardly gone, and we miss you so much already.