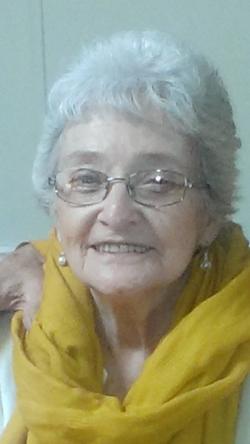 Please note:  The recently announced restrictions imposed by the Province of Nova Scotia do not effect our ability to hold Marie's wake or funeral, however residents of the Halifax Regional Municipality and surrounding areas are not permitted to attend.  We apologize for any inconvenience or hardship this may cause.

Full COVID19 Protocols can be found below.

Marie was born on December 9, 1937 in beautiful Havendale, Guysborough county. She was the first of four children born to the late William and Margaret (Bray) Cunningham.

After spending her childhood years growing up in Guysborough, she bravely moved to Halifax and began what would be a successful career at Maritime Tel & Tel. On a return visit to her childhood community, Marie had a chance meeting with Ambrose, who would become the love of her life. According to them both, it was love at first sight. As much as she enjoyed her career, she found her true calling as a "fiddler’s wife".

Marie gave birth to 11 children, but her nurturing soul led their New France farmhouse to become a home for many more. Although many still consider her as a second Mom, her natural ability radiated when she earned her favourite title of "Nanny". A tireless homemaker, her pastimes included flower gardening, attending Sunday Mass, and canvassing for various charities including the Canadian Cancer Society, as she was a two-time cancer survivor. The Sears catalogue offered her an avenue to outfit both her home and the backs of her children, grandchildren, and chosen family. Her homemade bread, biscuits, and bottomless pot of tea made on the wood range, even in the summer months, welcomed friends, family, and strangers alike. In her later years, Marie developed a love for Bingo, scratch tickets, and family game nights.

Besides her parents, Marie was predeceased by her children Patricia, Marlene, John Allan, as well Margaret Ann and Ambrose Charles in infancy; her sister, Patsy Greencorn, and grandchild, Ambrose Gerard in infancy.

Visitation will be held Friday from 2 to 4 and 7 to 9 p.m. in the C.L. Curry Funeral home, 135 College St, Antigonish.  Social distancing protocols must be followed, and masks are mandatory.  A private, invitation-only Funeral Mass will be held Saturday in Immaculate Conception Church, Heatherton at 11 a.m. The funeral will be livestreamed in the VIDEOS tab on this page.

Memorial donations in memory of Marie can be made to the Antigonish Town and County Palliative Care Society or the Pictou-Antigonish Regional Library.

The family would like to extend a sincere thanks for the compassionate care given by the staff of Saint Martha’s Regional Hospital Palliative Care Unit, as well as Dr. John Chiasson, and the Antigonish and Area Homemakers Society.

All visitors are advised to bring a mask when attending a visitation at our funeral home.  There are markings on the floor which indicate six-foot distances as well as markings that indicate 6 feet from the family.  It is important that you respect those markings, and physical contact with the family is to be avoided at all times.  The province's social distancing guidelines can be found here.

At the direction of the Province of Nova Scotia, we will not be handling Mass or donation money, though cards can be made available for you.  You will be asked to provide your name and phone number for the purposes of tracing should a case of COVID-19 be reported.

Anyone who is exhibiting COVID-19 symptoms or who could be considered high-risk of contracting the coronavirus should avoid attending the visitation and funeral.  The list of COVID-19 symptoms can be found here.

We thank you for your understanding in these difficult times.