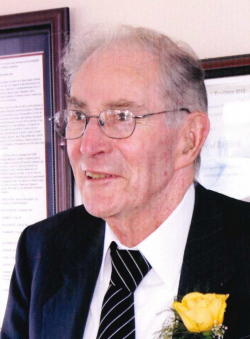 On July 19, 2021, we had to say goodbye to a very kind and gentle man, Charles James "Chic" Jackson, in High-Crest Sherbrooke Nursing Home.

Born in Seattle and raised in Saskatchewan, he was a son of the late James and Sarah Jackson.

Charlie left home at a very young age and rode the rails of Western Canada, working at each stop along the way. He settled in Calgary when he met his future wife of 69 years, Marie "Gran". After that, he worked at British American (later Gulf Oil) for over 25 years. In 1970, they moved to Nova Scotia with their two children where they established a beautiful home. He enjoyed gardening, raising chickens, outdoor strolls and Gran’s lemon pie. He was a very devoted Jehovah’s Witness, an elder in his congregation. He was a loving husband and an amazing father and gramps to his kids, grandkids, and great-grandkids.

Cremation has taken place, A service will be available via livestream at 1 p.m. Friday, July 23rd and can be viewed by clicking the Videos section on this web page.

Visitation for both Charlie and his wife Marie, who passed away in February, will be held on Friday, July 23 from 2 to 4 and 7 to 9 p.m. in C.L. Curry Funeral Home, 135 College Street, Antigonish. Private family funerals will be held for both.

Family flowers only please. In Memoriam, donations to the CNIB or Pancreatic Cancer Canada appreciated.