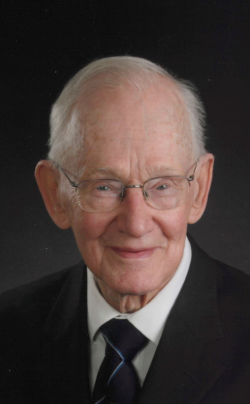 Born in New Glasgow, NS, to Harry and Jean, Bob lived a long, fulfilling life brimming with service, particularly to his adopted community of Antigonish.

Bob began his career at the bank but spent the bulk of it as the accountant for Eastern Automobile. His meticulous record-keeping made him much sought after by other small businesses and community organizations, and the number of committees Bob was on through the years could fill a sheet of paper. (We found the sheet of paper.) Among these were treasurer of Antigonish Performing Arts and Nova Scotia Provincial Music Festival, president of Clan Murray of Nova Scotia and the Antigonish Highland Society, secretary of Pictou Presbytery, and board member of St. Martha’s Hospital. Bob was especially dedicated to St. James United Church, where he contributed to the life of the church in many ways, most notably as choir director and, for his sins, junior choir director.

An avid gardener, Bob was also an accomplished singer and violinist who gave violin lessons to countless young people. Between this, performing arts organizations, and his involvement with Theatre Antigonish from its very beginnings, Bob filled the world with music and culture throughout his life, and it was in this role that so many will remember him. He would feel his greatest accomplishment, though, was his family.

He was accompanied through life by his high school sweetheart, Mavis (Worthylake), with whom he celebrated 67 years of marriage this past spring. Indeed, it’s hard to say "Bob" without saying "Bob and Mavis." Together they raised a family who will miss him dearly: their children, Janice (Sally), David (Andrea), Andrew, and Ross (Debbie); grandchildren Damien, Daniel (Beka), Adrian (Laura), Moira, Emily (Altan), Katie, James (Myriam), and Abby; and great-grandsons, Gavin and Theo.

Bob was predeceased by his sister, Jeanne.

Visitation will be held in C.L. Curry Funeral Home, 135 College St., Antigonish, on Thursday, August 12, from 2 - 4 pm and 7 - 9 pm. A Celebration of Life will be held at a later time when hopefully his family and many friends can raise their voices together in song to celebrate Bob’s kindness, generosity, and loving spirit.

A special thank you to Dr. John Chiasson, Dr. Amy Hendrix, and the staff of St. Martha’s ICU for their compassion and care in Bob’s final days.

In lieu of flowers, donations in Bob’s memory may be made to the St. James United Church Building Fund, P.O. Box 1178, Antigonish, NS, B2G 2L6 or the charity of your choice.