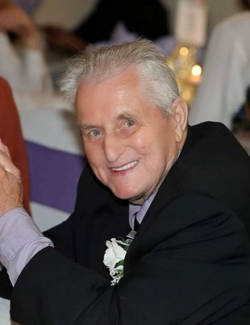 Wallace, Ambrose Stephen, New France, passed away peacefully surrounded by his loving family on September 10, 2021, after a brief illness. Born in Merland, he was the son of the late Owen S. and Anne (Haley) Wallace.

From a young age Ambrose possessed a strong work ethic while employed as a laborer in both forestry and construction, a trait he instilled in each of his children.

A natural musician, his legendary fiddle playing has graced stages in dance halls and wedding receptions throughout Nova Scotia and Prince Edward Island. It was while performing that he caught the eye of the woman who would be the love of his life for 62 years.

Ambrose and Marie raised their nine children on their New France homestead while working the land that provided for their young family. Their house was always a home to extended family, friends, and travellers alike. Visitors could always expect a lunch and guided tour of Ambrose’s trophy case while he regaled stories of performances for the Queen.

Ambrose’s many years of teaching his fiddle class ensured that his love of music will carry on for many generations through his students.

Grampie was happiest "down home" on Sunday afternoons with the house full of grandkids, food, and music.

A man of unwavering faith, Grampie will be sure to arrive at the gates of heaven to a chorus of angels grateful that the fiddler has finally arrived.

Visitation will be in C.L. Curry Funeral Home, 135 College Street, Antigonish on Sunday, September 12th from 2 to 4 and 7 to 9 pm.  Funeral Mass will be held in Immaculate Conception Church, Heatherton at 11:00 am on Monday. Burial in the parish cemetery. Social distancing protocols must be followed, and masks are mandatory.  The funeral will be streamed live on the funeral home website. Memorial donations may be made to The Canadian Cancer Society. Online condolences: www.clcurry.com

The family would like to thank Fr. Andrew Gillies, Dr. John Chiasson, as well as the staff, doctors, and nurses at St. Martha’s Regional Hospital for the compassionate care they provided for Dad/Grampie. Your professionalism and kindness will not be forgotten.