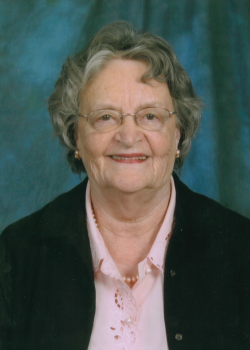 Please note Masks and Proof of Vaccinations are required for both the Visitation and Funeral Mass.  Those attending the Funeral are asked to allow ample time for verificatioon of full vaccination.

She was born June 9, 1928 at Cross Roads Ohio Antigonish Co., the daughter of the late Charles Henry MacDonald and Mary Johanna (Flynn) MacDonald.

Peggy graduated from Normal Teachers College in Truro. Her first teaching job was in a one room school house in Upper Ohio (Stewart Mills) Antigonish Co., where she taught grades 1 to 12. She arrived by horse and buggy from Goshen, Guysborough Co to stay with Claude Steeves and family in Upper Ohio. Peggy met her husband Private (Pte (B)) Donald Keir Steeves (born Harry Donald Brennan) while she was teaching in Upper Ohio and they were married for 51 years before he passed away in 1999.

Peggy was the president of the CBRJ and General Workers at St. Martha’s Hospital’s Union 1979 to 1990; President of the Home and School; President of St. Joseph’s CWL (receiving her fifty-year pin in 2020) and served on the Regional Tenancies Board for several years.

Peggy was a lifetime member of the Progressive Conservatives party and a member of the Royal Canadian Legion ARRAS Branch 59 Antigonish.

The Steeves family would like to thank the High-Crest Nursing Home staff and Father Lazarus for taking such good care of her in the final years of her life.