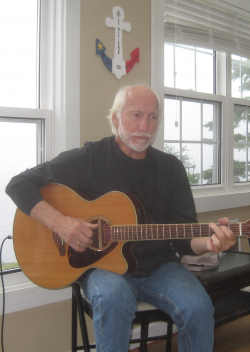 Service Information
Service Location
A private funeral will be held. A public Celebration of Life will be announced at a later date.
Requested Charity
St. Peter's Cemetery, Larry's River
Make A Donation

It is with deep sadness that we, his family, announce the death on November 15, 2021, of Blair Sherman Pellerin, 71, of Larry’s River, NS.

Blair was known, loved, and respected by the people of many communities in Eastern Guysborough County.  He was the consummate and big-hearted volunteer, who every day donated his time and efforts to helping others as an active participant in community and church affairs.

In his professional life Blair worked for many years for the provincial Department of Community Services out of the Guysborough office.

Blair was an avid sportsman as a fastball pitcher and hockey player.  He was also an accomplished musician, singer, and guitarist who fronted a popular rock and roll dance band during the 1970s and 80s.  For fifty years, he volunteered his musical talents to countless fundraisers and parties throughout Eastern Nova Scotia.

He is survived by his daughter, Danielle, his granddaughter, Lyla, his brother, Gordie, and numerous nieces and nephews.

Blair was predeceased by his parents, Percy and Elizabeth (Fougere) Pellerin, his wife, Joanne Tarr, their son, Jacques, and his siblings, Russell, Basil, Carroll, and Isabelle.

Due to COVID concerns, a private funeral Mass for family and invited guests will be held at St. Peter’s Church, Larry’s River.  A public celebration of Blair’s life will be held at a later date as COVID protocols evolve.