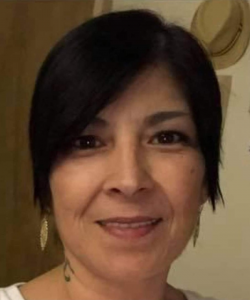 Alicia Marie Julian (49) – Life is a journey full of adventures and so much is unknown to us. One expects that as we live our lives and have time to fulfill those lifelong dreams of happiness. However, Alicia’s dreams of happiness with her children and family were taken from her when she fell sick to an illness that gave no warning. With Alicia’s mother and her family by her side, she made her final journey to the spirit world on November 25, 2021.

Born in Antigonish to Judy Bernard -Julian and the late Albert Julian. She attended Centennial College in Toronto Ontario. She worked in retail as a supervisor at the Home Depot store in Scarborough for several years before returning to her home community following the birth of her beautiful son. She then held the position of the Social Development Director for Paqtnkek Mi’kmaw Nation for 12 years.

Alicia often thought she wasn’t strong, but she was the definition of the word as she fought until she didn’t have anymore in her. She was our brilliant Mi’kmaw Woman who was always up for an adventure whether that be a road trip to Ontario with Nana and the kids, going out on the four-wheeler or just cruising. Wherever she went, she always had a contagious friendly smile for anyone she came across. It was her love of cooking that she used to give back to her community always preparing meals for all community functions. She took great care and pride in preparing meals whenever she catered community functions and always asked for feedback, wanting to perfect her dishes. Her children were her heart and soul because whatever she did, she did for them. Much of her downtime was spent with her kids, playing bingo, or dropping in on her E.C. family. Win or lose it really didn’t matter because she felt like the odds would be on her side eventually.

Valid proof of vaccination is required for the visitation, funeral, and Saliday, and masks are mandatory.