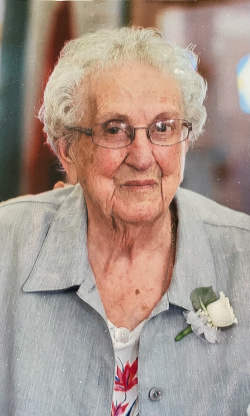 Dorothy was born, raised, and brought up her large family in Cape Jack, a daughter of the late Matilda and Walter DeCoste.

As a young women Dorothy earned a wage working in the lobster factory in Havre Boucher until she married the love of her life Johnny after he returned from the war.  She then remained at home to raise her family.  She enjoyed having visitors come over on special occasions and loved to go to dances.

Later in life she truly enjoyed the time spent with old and new friends, playing cards either in homes, at the Senior Citizen’s complex, or at the Havre Boucher card plays. She loved to tell you when she won but wasn’t too happy when she lost. Her other hobbies included knitting (especially for the grandchildren and great-grandchildren), crocheting, making quilts, painting, and completing word find puzzles.  Dorothy had a strong Catholic faith and was often seen with the rosary in her hand. She was a member of St. Paul’s Parish in Havre Boucher. Her love of her family could always be seen in what she did for them, whether it was cooking, baking, or just offering emotional support when needed. She relished the times when her family was all around her especially after church on Sunday mornings and there was an extra twinkle in her eye when the grandchildren and great grandchildren were around.

Dorothy was predeceased by her husband John and an infant daughter, Elizabeth Dianne; and brothers, Leonard and Norman DeCoste.  She was the last surviving member of her immediate family.

Unfortunately, due to Covid restrictions and the ongoing pandemic, the visitation and funeral services on Friday, December 31, 2021 will be limited to the immediate family only. Rev. Allan MacPhie presiding.

The funeral will be recorded and available on C.L Curry Funeral Home website later in the day. Link will be available on this website.

Anyone who would like to make donations in memory of Dorothy May make them to the Havre Boucher Veterans’ Association, St Paul’s Cemetery Fund, or a charity of your choice.