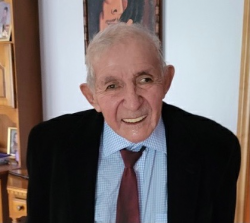 Mr. Julien's funeral has been postponed until today at

It will still be streamed live and recorded at that time.

Ronnie was born in Antigonish, NS on June 23, 1943 to the late Bridget Julian (née Lafford) of Paqtnkek and Benjamin Francis "Pasmi Moose" of Pictou Landing.

In his home community of Paqtnkek, he was respectfully known as Uncle Ron, the oldest man in Paqtnkek, which he was very proud of.  Ron was a Mi’kmaq icon who was well known throughout all the Mi’kmaw communities and affectionately known as "Ronnie Moose".  Ron spent most of his life advocating for the Mi’kmaw people and was always promoting the importance of Mi’kmaw aspects, especially language and culture.  His knowledge of the language was prolific.  Not only did he know the direct translation, but he also knew the direct meaning of the Mi’kmaq words.  But more importantly he understood the Mi’kmaq cultural values imbedded in the Mi’kmaq vocabulary.  He understood that the Mi’kmaq cultural identity was imbedded in the language including the humorous components and translations.  He was an extremely intelligent man and also had a very broad vocabulary in the English language, which he never missed an opportunity to use.  His knowledge was phenomenal, whether that be with our Mi’kmaw ways or even watching Jeopardy.  It was like he knew the answer before the contestant.

Ron spent much of his early life working in Boston, Massachusetts before returning to Canada in the 1970's.  Upon returning to Canada, he attended the Aboriginal University Preparation Program (Manitou College) in Quebec.  Afterwards, he went on to attend Algonquin College in Ottawa, where he graduated with an Arts & Science diploma.  He then went on to hold many different positions, including Vice President of the Union of Nova Scotia Indians from 1981 to 1983 and numerous committees.  He also worked with the Odawa Native Friendship Centre, Native Alcohol & Drug Counselling, and Paqtnkek Mi’kmaw Nation.  For many years, Ron was a Mi’kmaw court translator, where he ensured that Mi’kmaw speakers that were involved in the justice system were able to be served in their own language. His bigger than life personality was also well known in the Mi’kmaki, so much that in 1985 the Mi’kmaw Native Friendship Centre organized the "Ronnie Moose Roast" in his honor to celebrate all of the great experiences people had with him. It was through these various roles in his life that he was able to give back to the Mi’kmaw, something that was extremely important to him.

We cannot go without saying that Ron was well known for being a man who "got around", as he traveled extensively throughout the Mi’kmaw communities, Canada, and the US, even during times when he did not have a vehicle. He relied on the bus, train, rides from friends, and good ol’ hitchhiking to get to his many destinations. Many people would often say that even when Ron hitchhiked, he often arrived at the destination before they did, and they would be traveling with their own car. Even in his later years when his eyesight diminished, his tenacity and persistence were evident, as he would be seen walking up the road, heading out to visit an old friend, to the gaming centre to play machines, or paying his respect at a funeral, nothing could stop the Moose!

For the last 10 years of his life, he lived in Ottawa, Ontario where he made strong friendships and was a familiar face at the Wabhno Health Centre and the Odawa Friendship Centre.  Even when he lived there, he seemed to always find someone he knew from Nova Scotia, whether that be at a conference or event they were attending.

Ronnie is survived by nieces, Beverly Julian; Millbrook, Linda Julian- DeWilde (Jack), AnneMarie Paul (Kerry), and Mary Margaret Paul; all of Paqtnkek.  His nephews Donald Julian, and Gerard Julian; both of Paqtnkek.  Great nieces Laurie Ann Julian and Kimberly Julian (Bobby) and many more nephews and great grandnieces. He will also be greatly missed by his, Gal Pals; Michelle Willis and Valerie Murphy.

Besides his parents, he was predeceased by his sister, Ethel Lewis (Charlie); his brothers, Freeman Julian (Theresa), and Albert Julian (Margaret); all of Paqtnkek.

Uncle Ron will be waked at the Paqtnkek Community Gymnasium beginning on Thursday January 6th, 2022 at 4 PM for visitation with additional visitation periods Friday afternoon and Friday evening.  Funeral Mass will be held on Saturday, January 8, at 11 AM, at Immaculate Conception Church in Heatherton, NS with cremation to follow.

All of those who wish to pay their respects will be asked to please follow Covid Protocols, including wearing your mask at all times, proof of double vaccination, and social distancing. Funeral arrangements are under the direction of C.L. Curry Funeral Home, Antigonish, NS. Online condolences: www.clcurry.com

"So Long, Everybody" – Alex Trebek 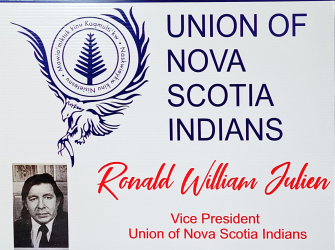 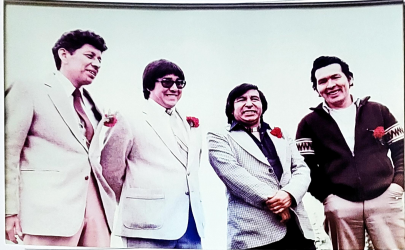