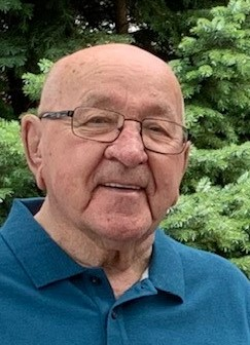 Haley, Charles Patrick - It is with sad hearts that we say a final farewell to Charlie, 89, who passed in his sleep at the RK MacDonald Nursing Home on April 20, 2022. Dad was a devoted husband to his wife Marie of 57 years and a loving father and grandfather. We will miss him dearly.

Born and raised in Glace Bay, Dad remained a true Cape Bretoner in spirit. But it would be Antigonish he would later call home. He began his career as a baker at McFadgen’s Bakery in the Bay and moved to Antigonish in the early 1970s to accept a position as pastry chef at Mount St. Bernard College on the StFX campus.  He truly loved his craft and took great pride in his delicious, made-from-scratch creations. He especially enjoyed baking for the students who eagerly looked to see what culinary delights would be waiting for them every day.

Upon his retirement in the mid-1990s, he enjoyed spending more time with his grandchildren and "puttering" around, working on his home and yard. He loved watching baseball in the summer and hockey in the winter and playing cards. And he never passed on an opportunity for some good-natured teasing! Under his gruff façade lay a soft heart.

Besides his wife, Marie (McMullin) he is predeceased by their son Dennis in infancy; sister Pearl; sister-in-law Sheila; and brothers-in-law Alex and Edward.

Cremation has taken place with a graveside service in Glace Bay at a later date.  Memorial donations may be made to a charity of choice.