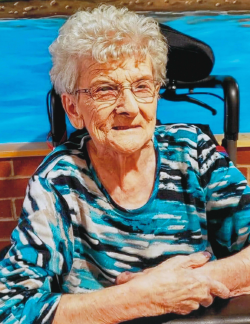 Josephine was a dedicated member of St. Peter’s Parish CWL, Tracadie. She was aways ready and able to donate baking or items to all fundraising events that took place in the St Peter’s Parish and surrounding communities.  She had a kind and gentle manner and was always ready to help when needed.

She was predeceased by brothers, Berkley, Walter, and Russell Mattie; sister-in-law; Louise, Ruth and Theresa Mattie.

The family wish to extend a sincere thank you to Dr. William Booth for his care over the years and to St. Ann’s Nursing Home, Arichat for their continued care while she was a resident.  Also, thank you to the caregivers who spent time with her while she lived with Gerard and Hazel.

Visitation will be Thursday, April 28th from 10:00 am until time of funeral at 11:00 am in St. Peter’s Church, Tracadie, presided by Reverend John Barry, assisted by Deacon Berkley Guthro. A livestream of the funeral mass will be available on this website.