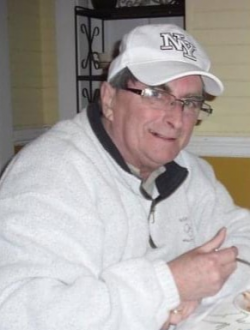 Born in Antigonish he was the son of the late Laughlin and Rita (Wallace) MacIntyre.

As owner-operator of Jim’s One Stop in Antigonish, Jim crossed paths with many folks over the years. He greeted all by name, with a friendly smile and, many times, a story. He was an active member of the community, involved in baseball, softball and hockey, and an early member of Antigonish Crime Prevention.  In retirement, Jim cherished his friendships with the Wednesday Coffee Group.

He was predeceased by sister-in-law Rose Marie MacIntyre and brother in law, Donnie MacPherson.

Visitation will be in C.L. Curry Funeral Home, 135 College Street, Antigonish on Wednesday  from 2 to 4 and 7 to 9 pm.  Funeral Mass will be in St. Ninian Cathedral on Thursday at 11:00 am.   Burial in St. Ninian Cemetery.  Donations in memory may be made to Antigonish Town and County Palliative Care Society or a charity of your choice.  Online condolences: www.clcurry.com