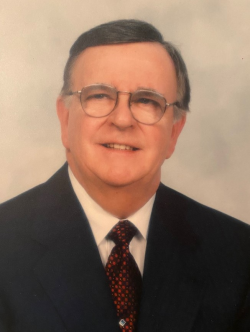 Curry, Francis X. "Frank", of Leduc, AB and formerly of Antigonish passed away peacefully on June 6, 2022, in Westview Continuing Care Centre in Stony Plain, AB at the age of 78.

Born in Glace Bay, he was a son of the late Charles Leo and Mary Elizabeth (McLaughlin) Curry.

Frank hung in there like a wet sock, to use one of his many famous turns-of-phrase.  He loved his family greatly, and his baritone voice will be missed in the family sing-alongs.  He loved cars old and new, and a detailed car with dirty tires was like wearing sneakers to the prom.  Though he believed in efficiency, that did not extend to how quickly he ate a meal.

Frank donated much of his time to the Kinsmen, and he held many positions within the organization over the years.

Frank was a dedicated funeral professional and a first-class embalmer. He was co-owner of Curry Bros. Funeral Directors and Ambulance in Antigonish from 1964 until 1997.  After that, he owned McArthur Bros & MacNeil Funeral Home in Cornwall, Ontario, and the Winchester & Chesterville Funeral Homes about an hour north until his retirement in 2012, after which he moved to Alberta to be closer to his children.

Visitation will be held Sunday from 2 to 4 and 7 to 9pm in C.L. Curry Funeral Home, 135 College Street, Antigonish, which he founded with his brother, Chuck. Funeral Mass will be held Monday at 10:00am in St. Ninian Cathedral, Antigonish, Reverend Danny MacLennan presiding.  Burial in St. Anne’s Cemetery, Glace Bay.