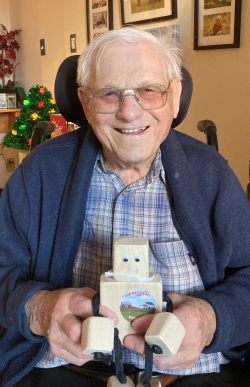 Born in Pomquet, he was the son of the Late John and Annie (Boudreau) Deon.

Throughout his working career, Bernie was a carpenter having worked many years for Floyd’s Construction and Saint Martha’s Hospital.  Devoted to his faith, he was a member of Ste. Croix Parish in Pomquet.

Besides his parents he is predeceased by his spouse Lena (Morrell); sons, Pierre, and Joseph; son-in-law Barry Chisholm; brothers Joseph, Wallace, Francis, and Clement; sisters Rita, Irene, Kay, and Jane.

Funeral Mass will be held at Ste. Croix Church in Pomquet on Friday, June 24th with the Reverend Andrew Gillies presiding.  Burial in the Parish Cemetery.  The family has requested that masks be worn at the Funeral Mass.

Memorial donations may be made to the Ste. Croix Cemetery.

The family would like to thank the R.K. MacDonald Nursing Home staff and Dr. John Chiasson for the wonderful care they provided Bernie over the years.