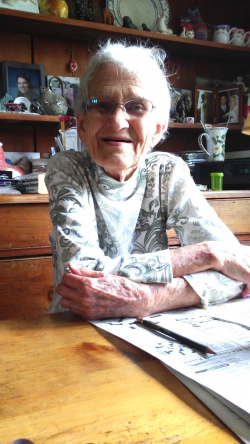 She grew up during the depression and was a teenager during WWII. Anne became penpals  with Roy Hulbert, a sailor in the US Navy who was stationed in the Caribbean during The War. At the conclusion of the conflict, Roy showed up at the Tomlinson’s door.  Her sister Grace, who was a few years older, pushed Anne out of the way so she could check out the young man for herself first! Roy was a farmer and Anne was a city girl, but after a short courtship, the two married and Anne became a farmer’s wife, a role that she easily adapted to and loved. Anne and Roy raised five children on their farm in Holliston, Massachusetts – four lovely girls (Sue, Joanne, Deb, and Martha) and one troublesome boy (Burt). During the Vietnam War, however, Anne and Roy became disillusioned with the US government and decided to immigrate to Canada. After purchasing a farm in Nova Scotia, Anne and Roy packed up and moved with their two youngest children, Burt and Martha.  Anne and Roy thrived there and fell in love with the farming and fishing community of Bayfield. Anne was an avid knitter and many a head, hand, and foot were warmed by her wool creations. A voracious reader and CBC radio listener, she was also often found glued to her iPad. She was very interested in the weather, and she followed the variations of the weather in all the places where her children and grandchildren lived. Anne could be found sitting at the kitchen table with her cat and a week’s worth of reading in front of her. Newspapers and the Atlantic Magazine were piled high beside her, feeding her enquiring mind. When she wasn’t reading, Anne could be found in the garden, growing the family’s food and her beautiful flowers, especially her lupine garden, which she was most proud of and well known as the "lupine lady" of Bayfield. She was very fond of cider from the Hulbert orchard and she made sure that the apple trees were well cared for so the cider would keep flowing. Anne loved the ladies at her S & B knitting group and the BBC (Bayfield Book Club).

Three hours short of moving into her new house, Anne’s Castle, Anne decided it was time to leave on June 24 when her lupines were at their best. She was predeceased by her husband Roy and seven Tomlinson siblings, being the last surviving member of her Tomlinson family.

She is survived by her five children, three grandchildren Emily, Sarah, and Peter, and two great grandchildren Nathan and Ryley. Neighbour Paul Boyle was also like a second son to Anne and Roy.

Thank you to Dr. Hickey and Dr. Hendrix, all the Pharmasave staff (especially Claudette), continuing care / VON, palliative care, and Antigonish Area Homemaker Service. Although Anne never wanted to bother anyone, we would like to thank those who came to the rescue and helped Anne when she was in distress – Liz, Pat, and Maria. Celebration of her life will be at a later date.

Donations in her memory can be made to Continuing Care, VON, Palliative Care, or Antigonish Area Homemaker Service. Anne would be very happy if those reading this would learn to knit and complete at least three crosswords a day. Online condolences: www.clcurry.com.