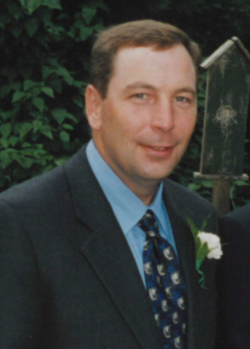 It is with broken hearts that we announce the death of Justin Nicholas Liengme, Antigonish, on June 30th, 2022. Justin was born in Vancouver, B.C. on October 5th 1967 and lived in Antigonish from 1968 onwards.

He graduated from John Hugh Gillis High School in 1986 and St. F.X. University with a B.Sc in Biology in 1992. His love of nature was a fundamental part of his soul, equalled only by his skill as a carpenter. He cared deeply for his family and also for the less fortunate and vulnerable in society. In addition to his career in the construction industry, he worked at Keppoch Mountain Ski Hill as a ski patroller and instructor. He volunteered in the Antigonish County Volunteer Fire Department, and in 1986 – 1988 he was a leader in the Antigonish Therapeutic Riding Association, using his horse Golden Boy to assist the handicapped riders in the program. More recently, he volunteered his carpentry skills in the Antigonish Affordable Housing Society. He was armed with a quick wit which he honed with regular barbs aimed affectionately at family and friends.

He was a loving - and deeply loved – son, brother, uncle, and friend who enjoyed nothing more than spending time with his nieces and nephews. However, his life presented many challenges and he struggled with demons which were not of his making. It is a comfort to us all to know that he is now at peace.

He is survived by his parents, Sue (Dr. Mike) O’Brien and Bernard (Pauline) Liengme, his brothers, Tim (Lois Gillis), Antigonish; and Damian (Tracy Pyne), Canmore, Alberta; and his sister, Nicky (Ian) Ayles, Bedford; and his nieces and nephews, Dan and Megan Liengme, Antigonish; Jack, Emma, and Hawksley Liengme, Canmore; and Ciara and Gavin Ayles, Bedford. He is also survived by numerous step-siblings and their families.

The care he received at St. Martha’s Hospital was outstanding. We are so grateful to all the staff in the Emergency, Intensive Care, and Palliative Care Units. In particular, we thank Dr. Ali Khalid and Sister Catherine Anne MacGillivray for their kindness, dedication, and compassion. We could not have asked for more.

Cremation has taken place.  Visitation will be held Wednesday in C.L. Curry Funeral Home, 135 College Street, Antigonish from 2 to 4 and 7 to 9pm.  The family recommends that, due to health concerns in the family, masks be worn.  A private celebration of life will be held at a later date.