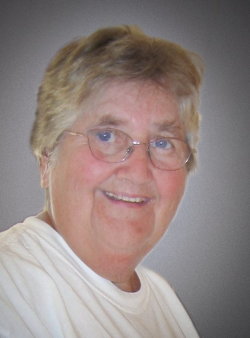 O’Keefe, Sister Maria Lawrence, 87 years, a Sister of St. Martha of Antigonish, died at St. Martha’s Regional Hospital, on Wednesday, September 21st, 2022, in the 67th year of her Religious Life.

Born in Sydney, Nova Scotia, she was the daughter of John Joseph and Matilda Jane (Burgey) O’Keefe.

Coming from a family of educators, she lived her vocation as a Martha as an educator as well. She attended St. Francis Xavier University, earning a Jr. Diploma in Education in 1957, returning to earn a BA and BEd in 1969. She taught in and served as principal in several schools in Cape Breton; Ingonish; Main-a-Dieu; and Bras d’Or. It was while in Main-a-Dieu that a request from a parent to accept their deaf child into her school turned into a career working with deaf children and their families. She obtained an MA in Education, specializing in education of deaf children from the University of Moncton. Along the way she also obtained an MA in Special Education from St. FX. She became a teacher and supervisor at the Atlantic Provincial School for Deaf in Amherst, NS. She travelled throughout Nova Scotia advocating for, establishing programs, and supervising the education of many children with hearing challenges. In 1984, accompanying her students, she met Pope John Paul II, at the IWK in Halifax.

After a career of 38 years as an educator, she served on several Boards and Committees, within the Congregation and in the larger community. She was a dedicated care giver to several members of her family until her own health brought her to Martha Place. A practical, kind woman with good sense of humour, Sr. Maria Lawrence never met a cat she didn’t like.

Sister Maria Lawrence is survived by her brother Gregory, and by her sisters-in law, nephews and nieces and their families. Besides her parents she was predeceased by brothers Lawrence and Redmond and sister Olive MacPhee.

Following the recommendations and procedures in this time of COVID, the remains will rest at Martha Place, Parkland Antigonish, where a private Celebration of Vigil will be held followed by a private Liturgy of Christian Burial on Tuesday September 27th, 2022, at 1:30pm in St. Martha Chapel at Martha Place.

Arrangements are under the direction of C.L. Curry Funeral Services of Antigonish. Online condolences: www.clcurry.com