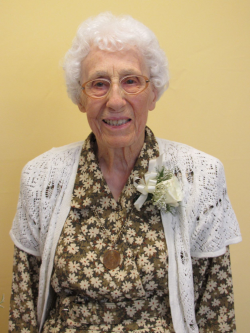 Connolly, Sister Madeline, formerly Sister Regina Clare, 105, a Sister of St. Martha of Antigonish, died at Mary’s Court, on Sunday November 6, 2022 in the 85th year of her Religious Life.

Born in Bristol’s Hope, Newfoundland and Labrador, Sister Madeline was the daughter of the late Samuel and Catherine (Power) Connolly.

While living at St. Martha’s Convent on the campus of St. Francis Xavier University, Sister served as Librarian at the University from 1942 to 1980. From 1980 to 1988 she ministered as the assistant librarian at St. Augustine’s Seminary in Scarborough, ON. After a year of spiritual renewal at Gonzaga University in Spokane, Washington, Sister Madeline did volunteer work while living at St. Martha’s Convent and Marian Community in Antigonish, St. Elizabeth’s Convent, Calgary, AB and New Waterford Consolidated Hospital in Cape Breton.

A voracious reader equaled only by playing cards, Sr. Madeline loved nothing more than a good conversation. Her stories from ministry at St. Francis Xavier Library gave life to the rich history, blessings, and challenges that accompanied the growth of the University. She kept active in a manner that left people in awe, taking the stairs daily rather than the elevator. Her life was rooted in prayer, and this was evident in the wisdom that she shared at every Martha gathering, leaving her Martha sisters with much to ponder.

Sister Madeline was the second oldest in a family of five children, she is the last member of her immediate family. Besides her parents, she was predeceased by brothers Lawrence, James and Fredrick, and sister Rita Matthews. She has many devoted nieces and nephews, cousins, and extended family, and friends, in particular her sister-in-law, Sheila.

Following the recommendations and procedures in place at this time, the remains will rest at Martha Place, Parkland Antigonish, where a private Celebration of Vigil will be held followed by a private Liturgy of Christian Burial on, Wednesday November 9, 2022, at 1:30pm in St. Martha Chapel at Martha Place, Parkland, Antigonish. Sister Connolly’s eulogy will be livestreamed on C.L. Curry Funeral Home website at 11:00 am on Wednesday.  Liturgy of Christian Burial will be livestreamed at 1:30 pm. Online condolences: www.clcurry.com