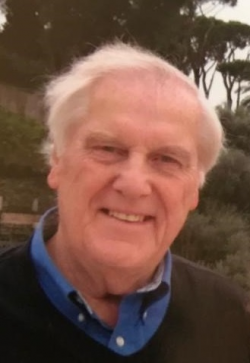 MEEHAN, William Francis, age 88, of Antigonish passed away peacefully on November 8, 2022 at St. Martha’s Regional Hospital, Antigonish.  Born in Halifax, he was the son of the late William and Elizabeth (Casey) and brother of the late Madeline Bidinost and Noreen Andrusyk.

A former officer in the Royal Canadian Navy, Bill studied business at St. F.X. (1961), where he was elected student president, and then law at Dalhousie University (1967).  He practiced law in Antigonish from 1969 until the time of his death, earning a longstanding reputation for fairness, professionalism and kindness.  He was an active member of St. Ninian’s Parish, the Knights of Columbus and, in recent years, the Celtic Music Interpretative Centre, where he served on the board.  His greatest passions in life were his family, his faith, the practice of law, travel and Celtic music.

He is survived by his wife Grace, his children Anthony, John, Michael and Jennifer, his grandchildren, Kaia, Rohan, Shea, Lochlan, Liam, Michael, Marie-Helene and William.