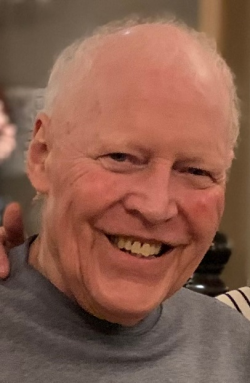 To view photo's of John life click on the video tab -

Whidden, John Howard, age 73, of Antigonish, passed away peacefully at home on November 17, 2022. The son of the late Albert and Isabel Whidden, John dedicated much of his life to running the family’s campground and rentals business in Antigonish.

Those in the community will remember his soft demeanour and ability to make things happen with seemingly little effort.  He was a pillar of the community and a key player in countless projects over the years, previously holding the position of president for both the Antigonish Chamber of Commerce and the Campground Owners Association of Nova Scotia. Until his health no longer permitted it, John was an active member at St. James United Church, where he served as an elder and held many positions over his decades of service.

He is survived by his son, Andrew (Alisha Gurney) in Antigonish; daughter, Susan in Charlottetown; and stepdaughter, Jessica with her children in Ottawa; sister, Dayle Humphreys, Antigonish; and brother, Edgar, Kelowna, BC.

He is predeceased by his wife, Alana, and numerous brothers and sisters.

Visitation will be held Tuesday from 2 to 6pm in C.L. Curry Funeral Home, 135 College St., Antigonish. As per his wishes, a private funeral will be held for family, after which his ashes will be laid to rest in the St. James & St. Paul Cemetery.

Family flowers only, please, but donations may be made to the St. Martha’s Regional Hospital Foundation, St. James United Church, or a charity of your choice.  Online condolences: www.clcurry.com.