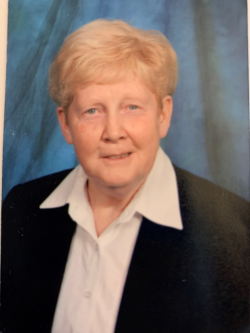 It is with great sadness that the family of Mary Kathleen (MacDonald) Purcell announce her passing in Antigonish, Nova Scotia on Friday, December 30, 2022 at the R.K. MacDonald Nursing Home. Raised in Marydale, Antigonish County, Nova Scotia, Mary was born on April 29, 1943 and was a daughter of the late Daniel Alexander MacDonald and Janet Agnes (Cameron) MacDonald.

Mary attended Nova Scotia Normal College (subsequently renamed the Nova Scotia Teachers College) where she studied to become a teacher, graduating in 1961. Mary then pursued additional studies in education at St. Francis Xavier University, Antigonish, Nova Scotia with graduation with a Bachelor of Arts degree and a Bachelor of Education degree in 1977. Mary was a kind and devoted teacher to many students during her 34 year career at St. Andrews Consolidated School, St. Andrews, Nova Scotia. Mary was also a faithful member of St. Andrew’s Catholic Church, and she was an active participant in the St. Andrew’s Parish Council and CWL. She also served on the St. Andrew’s Fire Department Board of Directors.

In addition to her love of her Church, her students, her community, and yes, the Toronto Maple Leafs hockey team, Mary’s greatest love was for her family. Mary always shared a sincere interest and concern for each and every member of her family and she was able to make each person feel special in her own selfless and humble way. She was such a kind and generous person with tremendous faith, and her prayers were powerful and comforting for everyone who was blessed to be included in them. She was a good and faithful servant to God throughout her entire life, and all who knew Mary were richer for having her in their lives. No doubt Mary will continue to support and guide all of those who treasured her in life and in death, and from heaven she will remain one of the most beautiful influences in our lives. She will be dearly missed by so many.

Mary’s incredible faith meant that she had no fear of dying, and she found great comfort and peace knowing that she would eventually experience a wonderful "family reunion" in heaven among all whom she loved who passed on before her.

Mary is survived by one brother, Francis Alexander MacDonald, of Saint John, New Brunswick, two sisters-in-law, Cordis MacDonald and Margaret Rose Robbins, as well as many cousins, nieces and nephews who were all dear to her heart. She also leaves behind three "fur babies" whom she also held close to her heart: her two cats, "Blackie" and "Pebbles", and a very special dog, "Fiona", who was a close companion to Mary at the nursing home, especially in the days prior to Mary’s passing.

In lieu of flowers, donations can be made to St. Andrew’s Catholic Church Cemetery, St. Andrew’s Church Social Action, the Antigonish Food Bank, or to a charity of the donor’s choice.

Arrangements are under the care of C.L. Curry Funeral Home, 135 College Street, Antigonish, Nova Scotia, with visitation on Monday, January 2, 2023 from 2:00pm-4:00pm and from 7:00pm-9:00pm. Mass of Christian Burial will take place on Tuesday, January 3, 2023 at 11:00am at St. Andrew’s Catholic Church in St. Andrew’s, Nova Scotia. Interment will take place at a later date. Online condolences: www.clcurry.com. Members of St. Andrew's CWL are asked to meet at C.L. Curry Funeral Home at 1:45 on Monday for prayers.