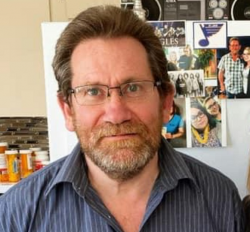 Lenders, John Adrian, Antigonish/Tangier.  It is with great sadness the family of John Adrian Lenders announce his passing at the Aberdeen Hospital, New Glasgow, surrounded by his family, on January 10, 2023 after a three year battle with brain cancer.

Born in Antigonish, he was the son of the late Theo and Hendrika Lenders.

John spent most of his time doing things outdoors, whether it was fixing up his house, out ski-dooing,  or gardening, just to name a few.  He loved watching sports of any kind, but most importantly his beloved St. Louis Blues.  John graduated from the Electronic Technician course at Pictou Regional Vocational School in 1978-79 and then went on to Radio College of Canada in 1981-82.  As owner-operator of Cape Nova Electronics in Antigonish he got to provide service to, and make connections with, many people in the area.

He is survived by daughters, Kelsey (Scott) and Allison (Josh); brothers: Robert (Dorothy) and Leo (Lena), nieces Lisa and Ashley and nephew Robbie, partner Vicky, mother of his children and friend Sherry, and his best friend and sidekick, Tucker.

John was predeceased by his parents Theo and Hendrika Lenders.

Visitation will be in C.L. Curry Funeral Home, 135 College Street, Antigonish on Thursday, January 12th, from 2 to 4 and 7 to 9 pm.  Funeral Mass will be held in St. Ninian Cathedral on Friday at 11:00 am with Father Danny MacLennan presiding.  Burial in the parish cemetery at a later date.  Donations in memory may be made to the Canadian Cancer Society.  Online condolences: www.clcurry.com.