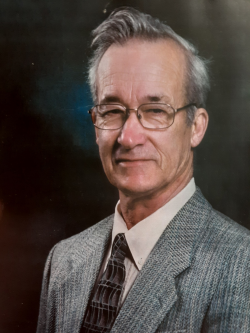 DEWOLFE, Walter Byron, 87, Post Road, Antigonish, died peacefully at home on January 10, 2023 surrounded by his family. Born in Ship Harbour, he was the son of the late William and Carrie (Eisan) DeWolfe.

Walter worked in the Security Department at St. Francis Xavier University for thirty years before retiring in 2000.

He is survived by his beloved wife of 56 years Mary (Hall), his daughters Vera, Antigonish; Carrie (Kevin), their children Brandon and Courtney (Alex), Ontario; his son Kenny (Barbara), their children Kenneth, Ashley, and Shawna, Massachusetts; step daughter Darlene, her daughter Michelle (Shane) and her children, Antigonish. He will be missed by his brothers Ansel and Fred (Susan), brother in law Donald, foster sisters Linda and Janice, all of the Halifax Region; and many nieces and nephews. He was predeceased by his sisters-in-law Betty and Delores, step daughter Marlene, and step son-in-law Billy.

Cremation has taken place. Burial in St. James/St. Paul Cemetery in the spring.

Special thanks to the staff of St. Martha’s Palliative Care Team and to VON Antigonish for providing comfort and support over the past few weeks. Online condolences`: www.clcurry.com.

Charitable donations may be made in Walter`s name to the Antigonish Town and County Palliative Care Society or to a charity of your choice. Online condolences: www.clcurry.com.