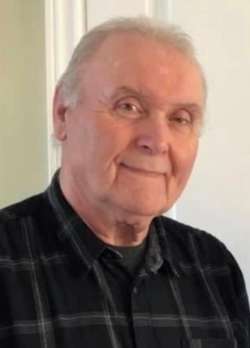 Born in Antigonish, he was a son of the late John Robert and Ann Marie (Duggan) Michaud.

Robert worked as a nursing orderly at the original St. Martha’s Hospital.  Prior to that, he served as a medic in the US military.  He was an active member of St. Mary’s Shooters Association and the Antigonish Marksmen Association.  He had a passion for target shooting.  Robert enjoyed spending time with his family and friends and adored his grandchildren; they were his pride and joy.

Predeceased by two brothers in infancy.

Visitation will be held Monday from 2 to 4 and 7 to 9pm in C.L. Curry Funeral Home, 135 College Street, Antigonish.  Funeral Mass will be held Tuesday in St. Ninian Cathedral, Antigonish, at 11am.  Burial in the parish cemetery in the spring.

A very special thank you to the wonderful nurses and staff at the Palliative Care Unit at St. Martha’s Hospital, and to Dr. Emily Rice, Dr. Brian Steeves, and Dr. Philip Cooper.

In Memoriam, donations to the Canadian Cancer Society or Crohn’s and Colitis Canada appreciated.